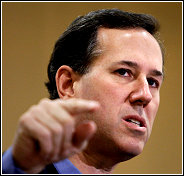 What's Rick Santorum talking about when he says things like this:

Rick Santorum warned that President Obama's attacks on faith could lead to a situation similar to the French Revolution.

Speaking at a campaign event in Texas on Wednesday night, the former Pennsylvania said that Obama was "crushing" faith in America.

"They are taking faith and crushing it. Why? Why? When you marginalize faith in America, when you remove the pillar of God given rights then what’s left?" Santorum said according to radio station WLS.

Or when he prattles on about "mainstream protestantism" being in "shambles" and "gone from the world of Christianity." Or evokes Satanic plots against America (bold emphasis mine):

"Satan has his sights on the United States of America!"

"Satan is attacking the great institutions of America, using those great vices of pride, vanity, and sensuality as the root to attack all of the strong plants that has so deeply rooted in the American tradition." - [Rick Santorum addressing students at Ave Maria University in 2008]

And there's this: from Revolution and Counter-Revolution by Plinio Correa de Oliveira (blod emphasis mine):

This terrible enemy has a name: It is called the Revolution.

Its profound cause is an explosion of pride and sensuality that has inspired, not one system, but, rather, a whole chain of ideological systems. Their wide acceptance gave rise to the three great revolutions in the history of the West: the Pseudo-Reformation, the French Revolution, and Communism.

He told NCR that a distinction between private religious conviction and public responsibility, enshrined in John Kennedy’s famous speech in 1960 saying he would not take orders from the Catholic church if elected president, has caused “much harm in America.”

Why does Rick Santorum say these kinds of things?

You can read Revolution and Counter-Revolution at:
www.intratext.com/IXT/ENG0038/

Understand that the "Revolution" (the "enemy") that Oliveira describes consists of the Protestant Reformation, the French Revolution, Communism and liberalism in general (liturgical, cultural and socio-economic). The "Counter-Revolution" (the good guys) is traditional Catholicism and the Church.

From Revolution and Counter-Revolution Introduction:

As we write these words, our thoughts transcend the frontiers of Brazil, to our dear sister nations of Hispanic America, and thence to all Catholic nations. In each, this same evil exerts its undefined but overwhelming sway, producing symptoms of tragic grandeur. Consider this example among others. In a letter written in 1956 regarding the National Day of Thanksgiving, Msgr. Angelo Dell'Acqua, substitute for the Vatican secretary of state, said to Carlos Carmelo Cardinal de Vasconcellos Motta of Sao Paulo: "Because of the religious agnosticism of the states," there has been "a decline or almost loss of the sense of the Church in modern society." Now what enemy struck this terrible blow against the Bride of Christ? What is the common cause of this and so many other concomitant and like evils? What shall we call it? What are the means by which it acts? What is the secret of its victory? How can we combat it successfully?

Obviously, it would be difficult to find a more timely subject.

This terrible enemy has a name: It is called the Revolution.

Its profound cause is an explosion of pride and sensuality that has inspired, not one system, but, rather, a whole chain of ideological systems. Their wide acceptance gave rise to the three great revolutions in the history of the West: the Pseudo-Reformation, the French Revolution, and Communism.

Pride leads to hatred of all superiority and, thus, to the affirmation that inequality is an evil in itself at all levels, principally at the metaphysical and religious ones. This is the egalitarian aspect of the Revolution.

Sensuality, per se, tends to sweep aside all barriers. It does not accept restraints and leads to revolt against all authority and law, divine or human, ecclesiastical or civil. This is the liberal aspect of the Revolution.

Both aspects, which in the final analysis have a metaphysical character, seem contradictory on many occasions. But they are reconciled in the Marxist utopia of an anarchic paradise where a highly evolved mankind, "emancipated" from religion, would live in utmost order without political authority in total freedom. This, however, would not give rise to any inequality.

The Pseudo-Reformation was a first revolution. It implanted, in varying degrees, the spirit of doubt, religious liberalism, and ecclesiastical egalitarianism in the different sects it produced.

The French Revolution came next. It was the triumph of egalitarianism in two fields: the religious field in the form of atheism, speciously labeled as secularism; and the political field through the false maxim that all inequality is an injustice, all authority a danger, and freedom the supreme good.

Communism is the transposition of these maxims to the socioeconomic field.

These three revolutions are episodes of one single Revolution, within which socialism, liturgicism, the politique de la main tendue (policy of the extended hand), and the like are only transitional stages or attenuated manifestations.

That, in a wingnut shell, is the foundation for Santorum's recent pronouncements. And, as well, the inspiration for an organization called the American Society for the Defense of Tradition, Family and Property, or TFP.

From the TFP's "who we are" webpage - tfp.org (bold emphasis mine):

The American Society for the Defense of Tradition, Family and Property (TFP) is an organization of lay Catholic Americans concerned about the moral crisis shaking the remnants of Christian civilization. Its origins date back to January 1971, when the first TFP members started to group around the publication Crusade for a Christian Civilization. Today, with over 120,000 active members, volunteers and donors, the TFP is on the front lines of the Culture War, peacefully defending the values of tradition, family and private ownership.

Central to the TFP mission is the idea that the various crises threatening American society and the Church cannot be seen as separate and disjointed. Rather they originate from a single cause.

The TFP handbook Revolution and Counter-Revolution by Plinio Correa de Oliveira masterfully traces the historical and philosophical roots of this single cause: a phenomenon called the Revolution.

Under the patronage of St. Michael the Archangel

Most Rev. Daniel Jenky, bishop of Peoria, Ill., took the excellent initiative of ordering the prayer to St. Michael the Archangel composed by Pope Leo XIII to be recited during all Sunday Masses celebrated in his diocese. He has asked all his priests to announce as the prayer intention “for the freedom of the Catholic Church in America.”

Prayer to St. Michael the Archangel

Saint Michael the Archangel, defend us in battle; be our protection against the wickedness and snares of the devil. May God rebuke him, we humbly pray: and do thou, O Prince of the heavenly host, by the power of God, cast into hell Satan and all evil spirits who wander through the world seeking the ruin of souls. Amen.

“It is God’s invincible Archangel who commands the heavenly host, and it is the enemies of God who will ultimately be defeated,” the bishop said in a January 24 letter to the Catholics of his diocese.

Bishop Jenky’s request inspires us to place this campaign to abolish “Obamacare” under the patronage of the glorious Archangel and we encourage all Americans to recite the prayer daily.

We also ask the Blessed Virgin Mary, the Immaculate Conception and Patroness of the United States, to intercede for us in this great struggle.

And that is why Rick Santorum says the things he does. He's reading from the TFP handbook.

is everybody ready for the crusade?

Such a hatchet job of an article. Convoluted affirmations without any logical connections.

Come to think of it. This rewrite-up has more logic than the original.

Is this an attempt to identify some sort of 'smoking gun' in the hope of demonizing Santorum somehow?

Wise people draw knowledge from all sorts of sources. We can learn things from everyone - it might even be possible to learn something from the author of this article.

If Santorum gained some historical insight from Prof. Plinio Corrêa de Oliveira, good for him!

For the record, Prof. Plinio Corrêa de Oliveira (1908-1995) is not just a "guy from Brazil". He was an accomplished and celebrated journalist, author, university professor, politician, mentor and Catholic leader.

Knowledge may even come for those we don't agree with on all levels.

The important thing is to have an open mind and a desire for truth - things that the author of this article does not appear to have - but Santorum does!

One little thing we can learn about here is the use of quotation marks. For instance the phrase "guy from Brazil" doesn't actually appear anywhere in post (or "article") yet for some reason the commenter Ojitos places the phrase in quotation marks in order to affect a little scold pottle posture in which to wag a finger at me and remind me that Oliveira was a "celebrated" well rounded swell. Which might seem evident from the post especially if one were to read the biographical link provided. See, we can larn stuff here -- Demonstrating that "Knowledge may even come for those we don't agree with on all levels." Sooper! Anyway...

Oliveira was a Catholic authoritarian. Like a Catholic Integralist or Spanish Carlist, he believed in a society ruled by an aristocracy of elites (traditional Catholic elites preferrably) and insisted upon Catholic traditionalist dogma as a foundation in both government and civil society as supported by the Catholic Church. He would have been right at home in Franco's Spain. Oliveira even hops up on his tippy-toes in one section of Revolution and Counter-Revolution and gives a little cheer for government by dictatorship. As long as its his kind of dictatorship of course. So, yeah, keeping an open mind here, I have no doubt that Santorum may have gleaned some "insight" from Prof Plinio. I'd just like to know a little more about what, specifically, those insights might be. Maybe Santorum could share some of that knowledge with us? Maybe Ojitos has some knowledge of what insights Santorum might be interested in with rtespect to Oliveira and could share that knowledge? Afterall, its important to keep and open mind here in our search for the truth.