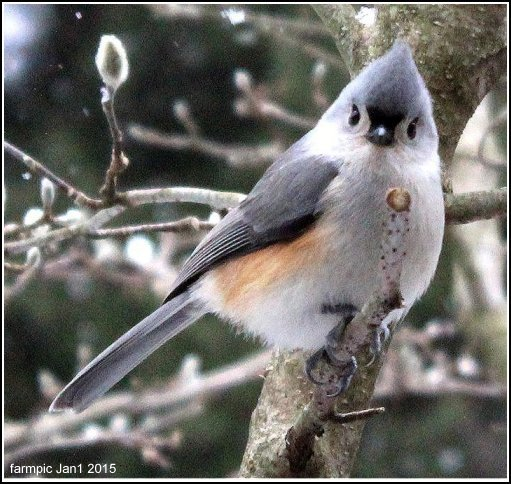 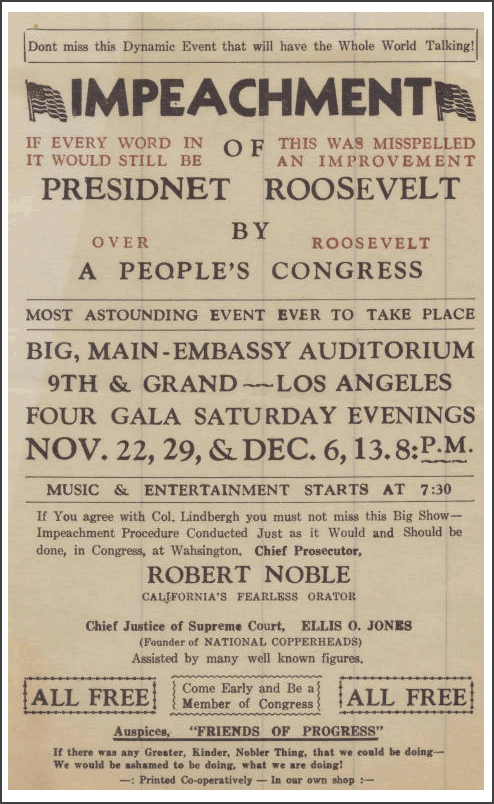 "When right wing racist fanatics are told over and over again that the President is a traitor, a Red, a 'nigger-lover,' that he has traduced the Constitution and is handing America over to a mongrelized world-state, there are bound to be some fanatics dull-witted enough to follow the logic of the indictment all the way...." ~ Max Lerner.


Just weeks before the attack on Pearl Harbor the FOP conducted several mock trials for the impeachment of President Franklin Roosevelt. A life-sized effigy of the President represented his presence at the 'court'. Contrived witnesses were called representing farmers, mothers, youths, and other special interest groups stating what little FDR had done to alleviate their personal situations. After December 7, weekly meetings continued to be held still attracting hundreds in attendance.

What follows are excerpts from court transcripts; [The] People v. [Robert] Noble, California Third District Court, April 24, 1945, describing some of the proceedings of the Friends of Progress meetings. Noble was charged and convicted under California sedition law in effect at the time.

FOP meeting, November 8, 1941 (photos are from a Life magazine article):

Robert Noble then followed [James Dorsey] Murray and stated that Murray had given a magnificent speech and that he agreed with and endorsed all of Murray's statements. Noble then announced that an impeachment proceeding would be held and that Ellis O. Jones would act as chief justice and that Noble was going to be the prosecutor of the President of the United States. Noble stated that there would be four meetings held to conduct the impeachment of the President. He then announced that the Friends of Progress had obtained headquarters at 4328 Anaheim-Telegraph Road on the east side of the city, and gave the telephone number.

On November 22, 1941, the Friends of Progress conducted an impeachment proceeding at the Embassy Auditorium in the large auditorium upstairs. There was a crowd of about 1,800 persons. Scattered throughout the audience were signs reading "Senate" and "House of Representatives." Appellant [Ellis O.] Jones opened the meeting and his opening remarks were to this effect: "Search the pages of American History and you will not find a blacker criminal than Franklin Delano Roosevelt"; that Franklin Roosevelt was a disgrace and should be kicked out of office, and that English and Americans were in league together to run both countries through perdition. Jones turned the meeting over to one Frank King who announced the playing of the Star Spangled Banner and requested the audience to stand and salute the flag.

After that he announced that a chaplain would read the invocation, whereupon appellant James McBride took the stand and muttered from a slip of paper what was supposed to be a prayer. Then King took charge of the meeting again and set forth the purposes of the impeachment and asked for a resolution from the floor. Appellant Noble was then introduced as a new member from California, came down the aisle and took a place on the platform at the speaker's table. He spoke about forty-five minutes against the British, the Jews, the New Dealers and the Bank of England, and ridiculed America as the home of the free. He referred to President Roosevelt's mention of the four freedoms and said that we didn't have four freedoms or two freedoms or one freedom; that there was no freedom at all left in America; that the last stronghold of real freedom in the world was Germany.

He denounced England, praised Germany and Hitler, and then proceeded to speak upon the subject of Franklin Roosevelt's broken promises in his election speeches. A vote was then taken on the impeachment question, and out of the large audience only three voted against the impeachment.

The meeting of the Friends of Progress on December 6, 1941, was attended by a very large audience. Ellis O. Jones, acting the part of the chief justice, began by saying that impeachment proceedings were to be continued and that the same personnel as on the previous week were present. Noble was then introduced and spoke about different personalities, and again denounced the President and declared that the emergency powers granted to the President should be taken away from him at once. He said that the United States was actually dying on its feet.


A number of purported witnesses were then called. The first was a man with a placard around his neck to indicate he was a farmer. He gave an account of how the farmers in general had been maltreated by the Roosevelt administration. The next witness was the appellant Genevieve Kerrigan who wore a placard representing the mothers of America. She made many denunciatory and derogatory statements concerning the President and the President's family. The next witness was a young man who was represented as "Blighted Youth." He informed the audience that he saw no future either for himself or for any other young man in this country, that there were about twelve million unemployed and that he, himself, could get no work and had had none since he left college. When "Blighted Youth" concluded these remarks, he walked by the effigy of President Roosevelt which was then on the stage and thumbed his nose at it.


Note the date of the FOP meeting in the poster - December 6, (1941). The day before the Japanese attack on Peal Harbor. It's not hard to imagine our current collection of conspiracy intoxicated wingnut wind-up toys - should they be granted the gift of time travel - accusing Roosevelt of staging the attack on Pearl Harbor in order to deflect attention from the FOP impeachment proceedings.

"There is a hate layer of opinion and emotion in America. There will be other McCarthys to come who will be hailed as its heroes." ~ Max Lerner, "McCarthyism: The Smell of Decay," New York Post, April 1950.